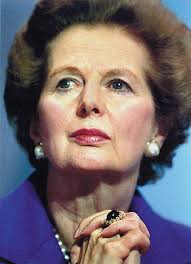 Margaret Thatcher, Britain's greatest post war Prime Minister is dead. She died at age 87 after suffering a stroke. The news was announced by her family today.

Magaret who died peacefully this morning was the first and only female Prime Minister of the United Kingdom. She left such remarkable legacies behind. Her life's story was acted out by Signourey Weaver and the movie won a lot of awards.

Magaret was popularly known as 'Iron Lady'
Posted by Kemi Hannah at 13:32