"You Are A Demon!" Janet Hubert Tells Wendy Williams In A Letter. 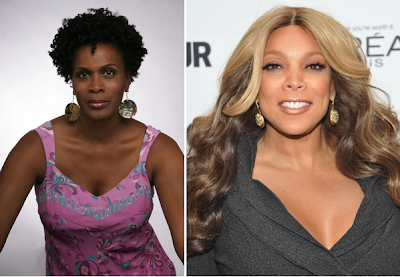 Okay, we know Wendy Williams could go a little off the mile when she wants to, especially when discussing someone else with a guest on her show- The Wendy Williams Show.

Couple of days ago, Wendy had Tatyana Ali as guest on her show. After teasing her beautiful guest about hooking up with Rapper Drake on her birthday, Wendy tuned up her 'nosy' act, asking Tatyana about what happened to Janet Hubert -who played the original role of Vivian Banks- in the 90's sitcom Fresh Prince Of Bel-Air, and why she was replaced on the show's reunion in 2011.

Well, Janet Hubert who was watching Tatyana play guest on The Wendy Williams Show, turned to her Facebook page and blasted Wendy after show aired. She posted:

"If you want to know something about me, or anything about my life, why not go to the horses mouth instead of being a horse’s ass and going to someone who was a little girl at the time, Wiggy Williams? How you doin!! Just saying it like I mean it sistergirl."

But, Janet felt the tonguelash she gave Wendy on her Facebook page wasn't so much a piece of her mind. She went on BlogTalkRadio to read an open letter. She wrote...

Read Janet's letter after the jump

Recently, you found the need to put an end to the mystery surrounding my departure from a show that I did so damn long ago that I don’t even remember why I departed.
Wendy Williams, or whatever you are supposed to be, I’m not quite sure. I’m writing you yet again, to appeal to your sense of womanhood or manhood as some suggest. Please close your mouth about things that you know nothing of.

Now, I watched your show to see dear Tatyana Ali sadly to say, fall into your trap. She even brought pictures of our days on the show from the Fresh Prince of Bel Air. You know most people watch you just to see what heinous things your mouth will say compared to what an overflowing volcano will spew forth on that day.
Now perhaps other black women have allowed you to berate them and continued to support you in this manner of madness and rewarding hatefulness. It seems to become the norm and has taken over our society completely. But I, Janet Hubert, at there and watched you tell the world that I was not a nice mother. I’m thinking to myself, the only person who has the right to say that is my child. So I sat there and watched you like some devilish sinkhole swallow up Tatyana Ali. You reduced her to a child sitting their tempting to keep some symbolism of dignity about her as you pried and invaded her life until you got what you wanted.
You are such a demon Wendy. You are wicked, awful, conniving, sinister, spiteful, jealous of every other woman. Simply put, Wendy you are a virus. You are not nor have you ever been a true woman. It seems as though your audience thirsts for the blood of others, as they are prompted to clap and hoop and holler at your shows and wigs and clothes.
Girl you will have some stars on your show and demean them before they even make it back home. I just would like to know who died and told you that you were reborn as Oprah. You want to be Oprah so bad that you would kill for it and you will kill anyone to achieve success. Sister, you will never be another Oprah. Oprah lifted her audience up and exuded an air of class.
But you know what Wendy, you are not even in my league. It is so beneath me to even bother with someone like you, but you asked for it. Didn’t nobody tell you to say my name on your show? You will not destroy all of the hard work that I went through for the last decade to clear my good name. I simply will not allow you to do so. I’m a lady and a real one. Wendy girlfriend you just messed with the wrong sista.
Now it’s funny for all that you and the world claim that I’ve done, I should have my own show like you. Darling there is nothing that I could have ever done in this lifetime in my career that would equal the vulgarity and ugliness and hatred that you spew on your show in one single day.
So, here is my advice to you Wendy. I want to help you. Learn to sit in a chair and stop fidgeting with yourself on camera. Wipe your giant teeth off camera, and don’t smear the spit on the chair. Please put some sweat pits under your arms, and darling if your sweater is pulling until there are lines across your chest, its too tight. You might want to deflate those tremendous breast. Take off the fake blonde hair. You have to stop playing the race card because you are coming off like a want to be white girl who will never be white.
Now, I have never seen anything besides hogs slobber at the mere mention of food, so I question your humanism at times. I have never seen a display of such self-hatred.
Just a couple more suggestions for you, please would you stop dissing all of us who’ve embraced our natural hair as many others and I have? And yes Wendy natural hair does belong on the red carpet whether you like it or not.
I kind of feel sorry for you. You sit there on your big-footed tacky throne everyday while millions of people are laughing at you not with you. There is a big difference. Nobody cares about what you think about his or her lives. But we do care about what you put out there about us. My heart saddens that women, especially black women, have embraced her evil after all of our struggles in society. You and your kind have set us back a hundred years or so. How dare you chastise anyone when you are such a travesty?
Now take that, chew it my dear and stick it on your lord have mercy you are disgusting fly ridden gum wall. And that’s the advice I have for you my sister.