Lagos Traffic; The Madness It Has Become. 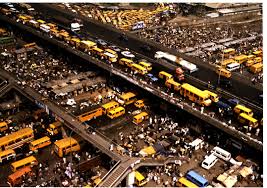 From Toll gate to oshodi, Ikeja to Berger, Obalande to Lekki; we all face the hideous traffic on our Lagos roads. It seems like the issue has gone from bad to worse but we have no choice but to suck it up. Some people have lamented on how they have to leave their houses as early as 5:00am just to beat the traffic because anything after that is going to be disastrous.

Certain routes are known for the constant traffic present there such as the Obalende to Island route which has traffic majorly at CMS and Awolowo road. The journey that should take about fifteen minutes would end up lasting for about forty-five minutes. The mainland routes are no better as we have a lot of people heading towards the 3rd mainland bridge in the morning thus causing journeys that should take about thirty minutes stretching to two hours or more.

The traffic on the various routes has been a result of bad roads which seem to be getting worse each day with the increasing amount of cars and bad driving by public buses as well as the lack of alternative routes for some major roads. If fly-overs, road repairs/extensions and more can be done by the government, this might just help solve the chaos that most Nigerians go through every day.

We hope the Federal Government and any other organisation that is associated with road management would look into this issue soonest. Feel your route needs help? let us know by commenting so the word can spread out.