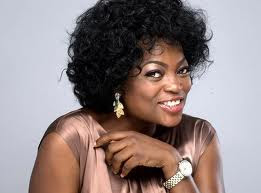 Funke Akindele, popularly known as Jenifa or Suliya, is a young talented yoruba actress who rose to fame in "I Need To Know", a TV series, and went on to earn a monstrous fame with her rib cracking movie, "JENIFA". So far, Funke has made over N56 million, netting over N20 million in 2012 alone. In her movie "The Return of Jenifa", Funke earned N35 million. Her movie, "Married but Living Single" made N9.9 million while "Maami" made N11 million. The actress is on her way to another cinema glory with a movie, "A Wish". Let’s hope she will be able to wave the magical wand again and create a box-office success.

Her movie, Jenifa cuts across all social groups with the street parlance in it becoming the mode of communication in social gathering. Everyone now says "YELSE" instead of YES, "BIZ GIRL" instead of BIG GIRL, and so on. Aside the fact that she's the richest yoruba movie actress, i think she's the most creative amongst them all. What do you think?