D'banj And Don Jazzy In A Coldwar? 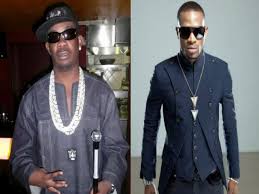 Barely few hours, after Don Jazzy a music producer, C.E.O of  Mavin Records, Loya Milk ambassador and former ally of D'banj made the announcment that he would be opening a night club in Lagos on the 21st of Dec. The Koko Master followed suit and tweeted  that he will be opening his club too. There seems to be a club race, I wonder when this coldwar will end. Read the tweet below.