Did Davido Really Pile Up N500,000 Club Bill On Wizkid And Bailed Away? 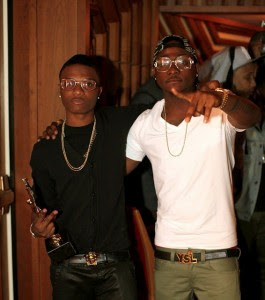 I read this gist on Thisdaylive website and i felt you guys should also know whats happening too, am not greedy, that's why am sharing this. lol. Anyway i don't really believe Davido could do that sha, but who am i to question human characters?


According to Thisdaylive, Wizkid was in a hotel on the Island in Lagos and got bored. He called Davido over the phone. Davido at the said time was in a company of five other guys. Please click the  READ MORE to continue

So, he asked his aide (a Yoruba guy resident in Surulere) to pick him at a hotel behind 1004 building on Victoria Island. He later joined Davido at a club tucked inside the Civic Centre, where they had some drink before zooming off to Movida on Idowu Taylor, Victoria Island. He went in a Toyota Camry belonging to Davido’s much older friend to Movida. And there, he ordered some bottles of Hennessy for himself and two friends who later joined him. Along the line, Wizkid had one drink too many and was whisked away into Davido’s Honda car, 2012 model.

He was frail, gasping and threw up in the car parked inside the UBA which is just opposite the fun spot. The side doors were opened for him to get some fresh air. At this time, Davido had already disappeared from the scene.

The bill was a little more than N500,000 and the bartenders were yet to be paid. So, they put pressure on Davido’s aide who later drove them to Wizkid’s house. He had grown slightly sane then and issued a cheque to the guys. He felt very betrayed and stopped calling Davido afterwards and he would do anything possible to make sure that his godfather, Banky W does not know something like that ever happened. This put strain on their relationship and when Davido was extending invites to his guest for his last concert, he flagrantly ignored Wizkid. All these had happened before he boycotted Wizkid’s performance at the NEA a couple of weeks back.

So tell me could this be true or just a make up story by one journalist to trample on these two super stars part? share your thoughts