Your Body And You: Effects Of Alcohol.

If we were to carry out a 'name the alcohol brands that you know' competition, a lot of you would be battling for the winning prize. But have you stopped to ponder on what all that alcohol is doing to your system?

Recent studies have shown that the moderate use of alcohol may have a beneficial effect on the coronary system. In general, it has been stated that for healthy people- a glass of wine for non- pregnant women and about two glasses for men can be considered as moderate. The size, age, weight, genetics of a person also contribute to what can be termed 'moderate'.

It's a different story for those that drink excessively. Drinking in excess has been known to cause serious harm to the body in the long run. Aside the immediate effects of acting stupid when under the influence of alcohol, here are some other things you should bare in mind when considering that bottle of alcohol.

Alcohol causes euphoria which depresses appetite. The result of this is that heavy drinkers tend to eat poorly and become malnourished.

Alcohol interferes with the body's metabolism of nutrients leading to the damage of the liver and digestive system.

Wonder why your tummy keeps getting bigger? Well it's partly due to the amount of fat accumulating in the liver as a result of your excess alcohol intake. This can also result in cancer.

Heart diseases. Alcohol raises the blood pressure, blood lipids thus increasing the risk of having a stroke or heart attack.

Drinking alcohol every now and then is not a crime. You should just bear in mind the effects of drinking in excess. As people say, "too much of everything is not good" 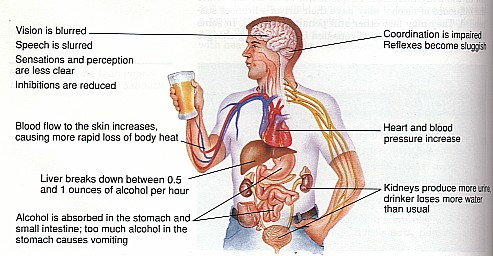