READ: Kidnapper's Confession Statement Of How His Gang Murdered Charlie Boy's Cousin And A Pregnant Woman. 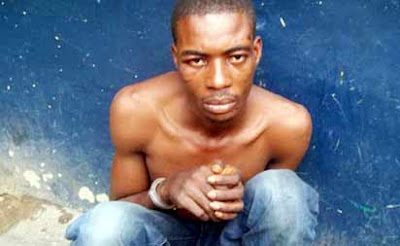 'We kidnap victims from Imo State, take them to Rivers state' …
Suspected leader of  a kidnap syndicate that abducted the Managing Director,  Naija Plaza Hotel, Oguta, Imo state and a pregnant woman and  killed them after collecting ransom from their relatives,  has been arrested by Policemen attached to Ilemba Hausa division in Lagos.

The suspect,   Chika Richard Nwabiarijie, who hails from Omoku Local Government Area of Rivers state, was arrested in a hotel around Ojo area, in the company of his wife.

26-year-old Richard, reportedly  fled Rivers state to take cover in Lagos, following the arrest of other members of his gang by the Imo state Police command.

The kidnappers numbering six and clad in Military camouflage as gathered, stormed the hotel located in Oguta,  on February 24, 2013,where they  killed two mobile policemen attached to the hotel during exchange of fire, before abducting their victim,one Emeka Asema (Charly Boy's cousin).

Unfortunately, the lifeless body of the hotel manager was reportedly found days later at Umunoha in Mbaitolu local government area of Imo state.

Before he was whisked into the police van, Crime Alert spoke with Richard, who, however dissociated himself from the abduction of the late hotel MD, saying other members of his gang were responsible.

But he disclosed that in one of the gang’s escapades which he partook in,  a pregnant woman  was abducted and killed even after receiving a ransom of N5 million  from her relatives.

Hear him: “ I fled from Rivers to Lagos, to hide  when I heard that members of my gang had been arrested. I swear to God, I was never involved in the kidnap of the hotel Managing Director. My colleagues did. They went to the hotel at about 8.30 pm and abducted him. In the process, they killed two mobile policemen on guard and made away with their riffles. The manager was brought to our hide out in Rivers state where he was held hostage for some days before the sum of N2.1 million  was received from his relatives as ransom.

On the day he was to be released, they blind- folded and drove him  out of the compound. But midway into the journey to his home town, they killed  him and dumped his body on the road.

We don’t just abduct anybody any how. We must have gathered information on the person’s financial background before we strike. We operated mostly in Imo state and our informant there is one Udo. Whenever he got information on anyone, he would alert us. I would then come from Rivers state and together  with other members, we would be monitoring our target’s movement and  security around the area before going into action.

Sometimes, we used  motorbikes or cars and at other times we use both. We would intercept the victim with the motorbikes or car and thereafter, order him/her to come out of the car.  If we were operating on motorbikes, we would zoom off in the victim’s car  and head straight for my place in Rivers,where the victim would be kept  until ransom was paid.”

Asked when and how he joined the gang, he replied, “  I was introduced to the gang by  Udo and Uche who are on the run. We met in a bar in Rivers state and I was tempted because I had no job. Since I joined the gang, I have gone on operation three times. At the end of each successful operation, I got N500,000.

The last person we kidnapped last from Imo state  was a man who came on a visit. At the end, my share of the ransom was N300,000.

“But before then, we had kidnapped a pregnant woman who  was killed after receiving ransom from her relatives. They told me they usually killed them so as to prevent them from revealing their identities to the police, since they are from the same state.

“We manufacture our weapons ourselves in Rivers state. I promise to take the police to the place. My job is just  to join them  to kidnap our target and also to keep watch over them.”

Asked if his wife was in the know, he shook his head, saying he only told her he was bringing her to Lagos for a treat.

HOW HE WAS ARRESTED

Crime Alert gathered  that operatives at the Imo state Police command  swung into action after the body of the hotel manager was discovered, during which the leader of the gang  whose name was given as Okorie was arrested.

During interrogation,  35-year-old Okorie who hails from Amii Igbere in Bende local government area  of Abia State  but resides  at Adimma House Ibocha Egbema, according to the  Imo state Police boss, Musa Katsina,  was discovered to have sneaked into  Oguta where his girlfriend,one Ifeoma, harboured him for  three days before the abduction of the hotelier.

Okorie’s confessional statement reportedly led to the arrest of four other members whose identities were given as Onyemuche Chris Ordukwu, a  26 -year-old barber  from Obakata Quarters in  Omoku Rivers State; Nze Damian Onyenye, 26 -year- old graduate from  the Institute of Management and Technology, IMT;  29-year-old  Ifeoma Ukachukwu, a  native of Oguma Oguta and 50-year-old  Ikechukwu Ossai who  hails from Oguta as well.

Policemen from Imo state who reportedly alerted policemen at Ilemba Hausa of Richard’s presence at the hotel, came to pick him and his wife, Monday, for onward investigation and prosecution.