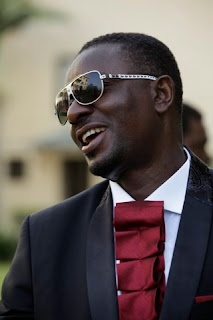 Talented Nollywood actor Emeka Ike in a recent interview with V Channel, a new cable station unveiled his personal experiences in life. He spoke about how his mother sold beans cake (Akara) to train him and today he's a millionaire among many other things.  Read it below.

“Some people think that I am a trouble maker. They think I am a bad boy in the movie industry. But that is not who I am. I hate injustice and I fight for the oppressed whenever I can. I will give you an illustration.

"One day, I was passing by Oshodi bridge when I saw a physically challenged person struggling with a policeman. I had to pull over immediately and confront the policeman, though he was armed. I succeeded in stopping the fight. This is the kind of thing I do.

I believe in hard work. I don’t date rich women for money. I believe that you can become a millionaire by selling akara. My mother sold akara to train me and I am a millionaire today.

We should be making more films in Igbo, Yoruba, Itsekiri, Efik and other Nigerian languages. I don’t like it when we speak English all the time and try to imitate the American accent.” Say Emeka Ike.