Who's On The Winning Side, D'banj Or Don Jazzy? 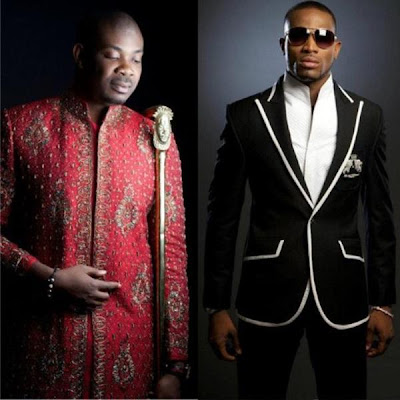 After the separation of Don Jazzy and D'banj, you'll agree with me that life has been smiling on one party better than the other. Fans have missed the combination of the duo on stage and the intro of "Its Don Jazzy Again" which D'banj yells in every of his songs. However, as 2012 rolls to an end, the question of who is on the winning side is on the lips of loyal fans and friends of once upon a time best of friends.

With Mavin, Don Jazzy's new record label with a formidable line up of artistes including Dr Sid, Wande Coal, D’Prince and surprisingly, Tiwa Savage, Don Jazzy has maintained his fans and popularity. Don Baba J has also won a couple of awards this year, had brand endorsement, bought a new house and also float a Nite Club. No doubt, 2012 is a good year for Don Jazzy.

For D'banj, it's unarguable that 'Koko Master', is getting the needed international exposure with his hit track, 'Oliver Twist' which sold over 15 million copies worldwide, and also spent weeks on most world's popular music charts. He won a couple of International awards, got brand endorsements, performed at big concerts, launched a nightclub named 'One Eleven'. More over, unlike D'banj of Mo' Hits, 'Eja Nla' as he's now fondly called, had couple of successful music collaborations that confirmed his dominance in Africa/ Nigeria music scene. While D'banj's new singles are enjoying massive airplay, those who have good listen ears affirmed that D'banj has improved in his delivery. What a beautiful year also for the Koko Master, who has moved on with his own record label.
With the brief comparison above, who is on the winning side?