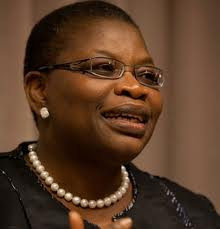 Pastor Mrs Obiageli Ezekwesili, Vice President for the Africa Region and a co-founder of transparency international showed her profound gratitude to God at the 2012 Holy Ghost Congress. She said that before her appointment as the Vice President for the Africa Region, Africa was described as a hopeless nation but now, Africa is described as a great nation which is on the rise. She added that God has also made her an economic adviser to many continents. Congratulations Obiegelii, your testimonies shall be permanent.