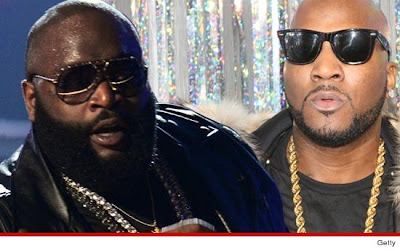 Watch the fight that broke out backstage between rappers Rick Ross and Young Jeezy at the 2012 BET Hip Hop Awards which was taped last night.

According to TMZ, Ross and Jeezy exchanged words backstage and started pushing and shoving each other. BET security and bodyguards for each of the rappers eventually separated themselves.

A member of Rick Ross' entourage allegedly pulled out a gun but no shots were fired according to police who were called to the scene. There were no arrests or reports of serious injuries