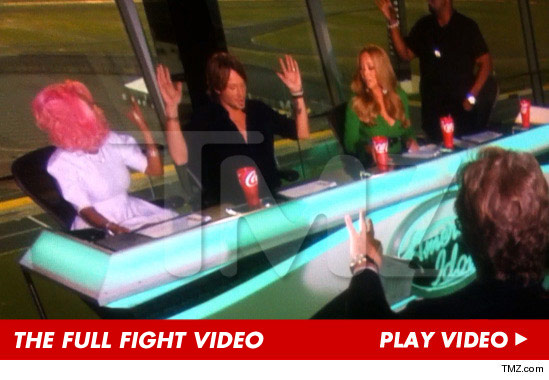 American Idol was on fire yesterday in North California as Nicki Minaj attacked Mariah Carey over a contestant's performance.  Please click the READ MORE to watch the video below


In the footage, obtained by TMZ, Nicki is clearly furious ... shouting, "I told them I'm not f*ckin' putting up with her f**kin' highness over there."

Sources say Nicki later threatened to "knock out" Mariah ... but she said it before the video starts.

It all went down while the two were sitting at the judge's table ... with Keith Urban sitting in between them and Randy Jackson sitting on the far end, next to Mariah.


We're told the whole thing exploded over a disagreement over a contestant's performance.


Listen closely as you play the video ... you'll hear

Randy Settle down, settle down

Nicki (inaudible) every 5 minutes. So every time you patronize me, I'm-ma take it back, and if you've got a f**king problem, handle it.

Nicki I told them I'm not f**kin' putting up with her f**king highness over there. Figure it the f**k out. Figure it out.

Nicki I'm not gonna sit here every f**king minute to have you come down and harass me every minute everyday.