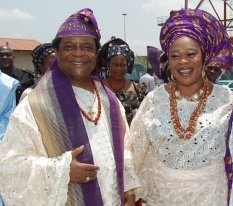 To steal from a general's wife, wow the houseboy really has some gut sha. Well according to Pm News; Thieves appear to be targeting the treasure boxes of wives of Nigeria’s retired generals with another case of a house help who stole the jewellery of the wife of General Olu Bajowa.

The latest incident happened in Ibadan. The suspect, Kingsley Aimekhu , a house help of the former acting Military Governor, South East Region and River States and ex- Ondo State Gubernatorial candidate, General Olu Bajowa, stole the jewellery, worth N25m from the wife of the General.

Aimekhu has been arrested and currently cooling his heels at the police cell alongside his accomplice, Alhaji Umaru Haruna . Please click the READ MORE to continue
Haruna buys and sells stolen property at Sabo Area of Ibadan, capital of Oyo State. The alleged thief stole the property in the General’s house in Ibadan.

The alleged thief who was on the run for some days was eventually tracked down by policemen attached to the Monitoring Unit of Oyo State Police Command.

P.M. NEWS gathered that luck ran out of the thief when Mrs. Bajowa suspected that the only person that could do such a job was her ex-house help which led her mentioning him to the police.

P.M. NEWS gathered that the police succeeded in arresting him through his friend who led them to where he was hiding.

Confessing, Aimekhu said that he sold the jewellery to Alhaji Haruna at Sabo at the price of N13m adding that the Alhaji specializes in buying stolen property adding that out of the N13m, he bought Volkswagen Bora car.

Aimekhu stated that he worked for his victim for two and half years before he was sacked stressing that he decided to go into stealing because he was jobless.

Narrating how he was arrested, he said, “I know everything about the house and I know when my master will not be around. So, on September 29, 2012 around 9a.m, I went to the house knowing that nobody would be at home. I jumped in and went to my madam’s room and stole her jewellery, wrist watch and other things.

He disclosed to PM NEWS that he has a house in Ibadan which he built from the proceeds made from criminal acts.

Haruna, who bought the jewellery, admitted that though, he bought it at N13m; he knew that it was more valuable.

The new Commissioner of Police in the state, Mr. Mbu Joseph Mbu also paraded a 300 level Mass Communication Student of Leads City University, Ibadan identified as Nurudeen for his involvement in internet scam.

The suspect who was arrested at a Cybercafé where he was carrying out his dastardly act confessed that he got into internet scam so that he could better his life and improve his quality of life.

He said that he made $10,000 in the space of three months from his first operation and $7,000 from the second operation.

According to him, he bought a jeep of about N7m from the proceeds of the scam.

He further confessed that whenever he is on holiday, he does not take his vehicle home so that his parents would not question him adding that his parents are not aware of what he is doing”.