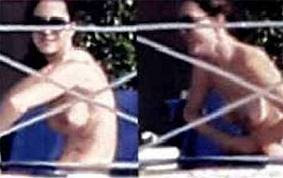 It has been a court battle between the royals and french magazine 'Closer', and just a few minutes ago, the court ruled in favor of royals by banning further publication of the nude pictures.

The royals argued that the future queen was treated as an object, while the magazine argued that such naked shots are now a normal thing in today's society, they stressed that this is not the days of queen Victoria where such images would have been completely tarnishing and disrespectful to a royal, and like others who live in the public eye, she should not be treated differently just because she is a royal. They said

An editor of Chi magazine who also published this said


'If I had not published them I would not be paid for the job I do. Above all, I published them for various reasons, as a journalistic scoop, it satisfies the curiosity of the readers, it is first time that the future Queen of England has been pictured in such a way.'

Do you think the court's ruling was fair? Was Kate's team given preferential treatment just because she is a royal? Or are the magazine owners and editors just giving flimsy excuses?