Pakistani Minister - $100,000 Bounty For Any One that Kills The Anti-Islamic Filmmaker 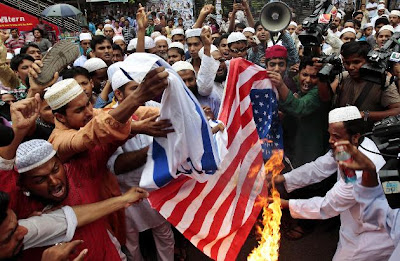 Why do Muslims think it is alright to kill to protest the film 'Innocence of Muslims' that made fun of Mohammed?

A Pakistani minister "Ghulam Ahmed Bilour" has offered $100,000 bounty to anyone who kills the maker of the Anti-Islamic film titled "Innocent of Muslim". He said :

“I announce today that this blasphemer who has abused the holy Prophet (PBUH), if somebody will kill him, I will give that person a prize of $100,000,"

"I also announce that if the government hands this person over to me, my heart says I will finish him with my own hands and then they can hang me,"

Do you think if Muslims continue with this attitude, they will continue to find it difficult to convince the world that Islam is a religion peace whose main message is submission to the will of the Almighty God, the most merciful.

Meanwhile the anti-Islam film produced in the US that has sparked  violent protests, attacks, killings in Libya, Egypt,  across the Middle East and Africa.