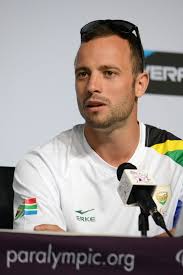 South African Paralympics star Oscar Pistorious was arrested for allegedly shooting his girlfriend dead at his home in Pretoria.

Suggestions in the local media state that Pistorious may have shot his girlfriend Reeva Steenkamp, mistaken her for a burglar and that the shooting could have been a Valentine's-Day-surprise-gone-wrong situation. There are speculations that Steenkamp who was shot four times in the head and arm may have been trying to surprise her boyfriend in his heavily guarded home and was mistaken for an intruder.

A police spokesman said that the athlete was distraught, "We can't comment on his emotional wellbeing, but he is traumatized after losing someone close to him," the spokesman said.

30-year-old Steenkamp who was also a well- recognized South African model was scheduled to feature in a reality TV show called Tropika Island Of Treasure. In a recent interview with Sunday Times in South Africa she described her Pristorious as "an impeccable man who always has her best interests at heart".

Steenkamp who seemingly had been looking forward to spending Valentine's Day with her boyfriend tweeted yesterday: "What do you have up your sleeve for your love tomorrow??? #getexcited #ValentinesDay. Responding to a follower who said she was going to make her husband a card with her children, the model wrote:  "That sounds amazing! Wow that's what it's all about! It should be a day of love for everyone :) may it be blessed!".

South Africa has some of the world's highest rates of violent crime and some homeowners carry weapons to defend themselves against intruders.

There were indications that Pistorius did have fears about his safety. In an interview with the Daily Mail before the London 2012 Games it was revealed he slept with a pistol next to his bed and kept a machine gun by a window. Pistorius had been arrested previously. In September 2009 he was arrested for assault after slamming a door on a woman. Family and friends at the time said it was an accident. 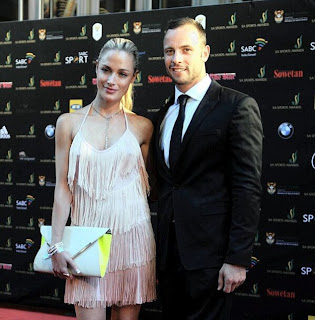 The Johannesburg-born sprinter won a legal battle over his blades with the International Association of Athletics Federations (IAAF) in 2008 for the right to compete in able-bodied competition.